I’m writing this in between two product demonstration sessions I’m running in London, which kinda sums up where I’m at right now – I’m exhausted. I’ve been working six-day weeks, and doing wrestling training on the seventh, for three weeks now. I’m starting to feel it. Luckily the guys at Bewilder Box have my back (as always!) and have allowed me to drop a shift this weekend, so I get a second day off this week. I’m planning to make the most of it and chill as much as possible!

The flip side of this is that everything is heading in the right direction for a successful year. You know that thing of giving a busy person work and it’ll get done? Well…. that. I’m incredibly motivated at the moment and seem to be getting through work as soon as it arrives on my desk.

I’ve spent quite a lot of time putting my new Brighton Fringe show together. It’s called Triggered and it’s completely different from anything I’ve done before. The show structure is jumping all over the place. I’m not sure whether it can be called an outright comedy show, but it’s certainly not theatre or spoken word so I’m not sure where I’m going to bill it.

The title is slightly contentious. I was fully aware it wasn’t the most original title in the world when I decided on it, but it is still the only one I’ve come across that serves the show properly. There are also right-wing connotations with the word when it comes to comedy, but this isn’t traditional left-wing comedy either, so, well… oh bollocks I can’t really say any more without spoilers.

Writing the show is definitely stretching me. I’m having to go to places and explore life in ways that I have either never done before, or haven’t accessed in a long time. It’s testing all of my prejudices, all of my established beliefs, and forcing me to see things from more than the Brighton perspective. And I have to say I like it.

I’m hoping the show has a practical application too. I’ve never been a fan of writing disposable comedy (although that’s not to say I don’t enjoy watching it) but I also don’t want to come across as preachy or sanctimonious as that’s the polar opposite of the message behind the show. It’s a tricky balance. 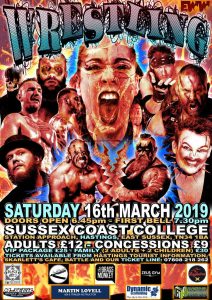 Something I’m really excited about is the EWW show on 16th March at Sussex Coast College in Hastings. I’ll be involved in some capacity, although I won’t be wrestling.

I’m putting a lot of focus on improving my general level of fitness at the moment. I’m working with a PT to develop a routine that will increase my strength and stamina, which is certainly something I’m lacking right now. I’ve going to the gym more than I have ever done, and for a change I’m starting to enjoy it. Okay, maybe “enjoy” is a bit strong, but it doesn’t feel like a chore like it used to, and I’m starting to feel the benefits. I’ve dropped another trouser size again, and I’m the lightest I’ve ever been in my adult life.

The flip side of this is that while my body is getting used to all these new things I’m asking it to do, it’s regularly refusing to do so, instead choosing to rebel. Currently I have a lower back pain and strained intercostal muscles. The intercostals are the worst. I took a bump on Sunday which felt fine, but it shocked my intercostals to the point that they tensed up and winded me. I couldn’t speak for a few minutes and breathing was difficult, but the following day I felt like nothing had happened. Since then they’ve come back with a vengeance, so I saw the doctor today, who advised there’s nothing I can do other than take ibuprofen and rest.

The doctor also suggested that I’m borderline anaemic. Apparently my iron levels were low on my blood test a few weeks ago. I’ve been referred for a second test to be sure. It would certainly make sense, as my energy levels are up and down quite a bit at the moment (though that will at least in part be due to my current routine), and having recently overhauled my diet there’s a good chance that I’ve ended up cutting things out that I need.

Despite all that, I’m on this path now, and I don’t intend getting off it. If it takes me a year, two years, five years – I will get to where I want to be.

In the meantime I’m just delighted to be part of the EWW family, and anything that I can do to help the show, I’ll do unconditionally. So go and buy tickets for 16th March, Sussex Coast College, NOW.

I hinted last month that my acting career was over. Mentally, it is. I can no longer bring myself to be at the mercy of the industry, so I’m no longer searching for an agent, trying to meet casting directors, or break into TV & film.

How To Be A Man

I’m going to prioritise getting this out once this current run of work is out of the way. Unfortunately I’ve missed my own deadline again, but I’m not willing to compromise on quality for this and it’s important that I get it right. It’ll be out when it’s out. I’ve got two more episodes to record and then I’ll start releasing them. I’m going to stop putting a deadline on this, and so hopefully it’ll be a nice surprise when it finally drops.

At some point I’ll have a break. I don’t know when it will be. Normally we go away for a long weekend around this time of year, but I’ve been so busy (and indeed I am booked in for work until the end of March) that it’s not something I can think about just yet. The good news is this work I’m doing is nicely paid, so hopefully it’ll pay for a nice short break in April.