I’ve had a lovely couple of weeks. I’ve been really busy – practically non-stop since the start of August – but the hard work provided almost immediate gratification.

After the rush of three intense days in Edinburgh I returned to a welcome run of freelance work. Despite all the work I’ve been doing, very little of it has been paid work for clients, so a couple of extra days of the boring day job have eased concerns about my income for next month.

Now although the job itself is boring, it does allow me a lot of time alone in the car. I use this time to listen to my favourite, and discover new, podcasts. I also listen to my favourite albums and download a few radio shows that allow me to discover new artists. As I’m coming to the end of writing the country album I’ve been writing about for a while, I’ve been really taking in every part of every song I hear. I’ve been putting a lot of time into considering the arrangements I would like – the instruments, the production, the vocal qualities etc. I’ve also been fine-tuning a lot of my lyrics. I realised that the vast majority of my songs are storytelling songs – often not sticking to the traditional verse-chorus-verse-chorus structure, although many of my singalongs are set up in this way. I’ve been changing a lot of individual words, swapping out entire sentences, and even moving verses around. This is the sort of attention to detail that I never paid to my songs when I was last performing solo regularly – over 11 years ago. I’m now planning on taking out a handful of songs to some open mics and seeing how they go down. I must admit to being a little reticent to perform in Brighton, as I’m not sure how much of a gauge it will be. I’m not sure bearded hipsters and self-interested muso types will be interested in my simple melodies, but I also need to get my vocal confidence back so it’ll be worthwhile regardless.

Actually, now I’ve typed that, I’m thinking I may go out busking again too… 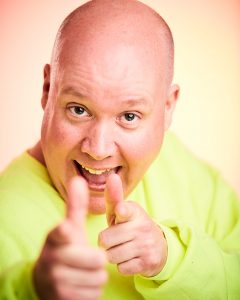 Yesterday I had an amazing headshot session with the wonderful David Myers. We had amazing fun and the new pictures are definitely the best I’ve ever had. Even if I say so myself, I was on top form, and combining that with working with a photographer of David’s stature meant that the shots could only ever be awesome. I’m still picking my favourites, but the one to the right is the final shot we took. We both looked at it and decided it was our favourite, at which point I suggested that we end the session there and then because we simply weren’t going to better it!

Obviously it won’t be my Spotlight/formal headshot – but it will no doubt form part of a portfolio that I will use for various projects.

David was great at helping me get “in the zone”. We chatted about photography too, which was great, and I learned a lot from the last time I worked with him that helped me prepare properly for this session.

I’ve also noticed that in the last six months or so my casting bracket has increased significantly. Until the end of last year I was able to get away with 28-35 as my casting age. However in recent months I’ve noticed different reactions towards me, suggesting that the lines on my face are taking their toll. I’ve also got a few little growths that have appeared – it’s nothing painful or infected – just a family trait. I guess what I’m saying is that I’m looking more like my dad. This is why the new headshots became a priority.

Speaking of photography, I uploaded a selection of new shot to the Brighton Cat Snapper page that has become a favourite pastime of mine. I wrote a short blog on my photography site about photography and wellbeing, and how the project really helps me in that respect. I’m hoping to pop out again next week when things have settled down a little.

I’ve also just got this cool new watermark for the pictures – isn’t it awesome?

I’ve been trying desperately to nail down guests for How To Be A Man, but it’s proving tricky. I’ve had a few expressions of interest, and I spoke tentatively to a couple of people in Edinburgh too, but actually getting them to commit is proving difficult. I’m not sure if it’s just the time of year or if there are apprehensions that no one is disclosing to me, but I’m trying to think of ways around it. I’d really like to get a series of six episodes out before the end of October, but so far only one is recorded. If you know of any males who have had a positive life changing experience after age 30, please put them in touch with me. I’m certain that this podcast will help a lot of people, and I’m starting to become genuinely frustrated! I also want to ride this wave of creative energy that I’m currently on – and I’ll certainly be a better podcast host while I’m in this headspace.

I’m also planning on recording a couple more SussexActors,co.uk podcasts – again, as soon as I can get guests to commit.

I have a feeling this will all come together in one short sharp burst, which will then leave me unable to work for a few days because each podcast takes a day out of my working week. Ho-hum, I’d rather be doing that than handing out dog biscuits anyway….

This wave of creative energy is fuelling a lot of ideas, but I really want to get a few more finished products out, be that a podcast, a few songs, a new play, or at least hitting a significant milestone for one of the projects. My new play is a slow-burner, although I’m tempted to just book the bloody show for Brighton Fringe next year and force myself to write it. It’s worked for me in the past, but I’m torn between letting this one simmer until the ingredients come together by themselves, or filling it with salt.

Hmm… that’s not the best analogy, is it? You get the idea, anyway.

Aaaaand finally – I’ve decided to finally stop pissing around and start training. I’m starting next Sunday 9th September and I can’t bloody wait. I’ve even signed up to DDP Yoga, and today I went to the gym again (#fuckthegym) for the first time in months. I feel a whole lot better for it, mind.

The catalyst this time was the realisation that my eating habits had gone to shit again, so I started tracking my food intake again (I did this before for a few months and found it helpful, but then thought I’d learned enough to be able to trust myself without it – WRONG) and then took out the one-week trial for DDP Yoga. I already feel more flexible and I have more energy.

I’m not (entirely) an idiot though, I know my life will get crazy and I’ll end up dipping in and out again.

So all in all it’s been a fun month or so. Let’s hope I can keep this flow going!