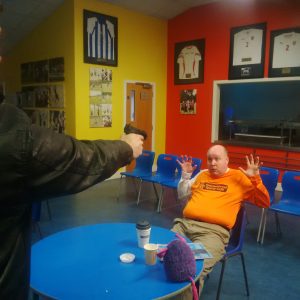 keep coming back to a thought. One single throwaway line that oversimplifies my actual feelings. One ill-considered protestation that keeps forcing itself into my mind, and I think there is a lot of truth in it. Trouble is, well, it’s troubling. And it also ignores the nuances of my actual feelings. That thought is this:

I feel this statement is both true and untrue at the same time. I keep finding different ways to quantify it, but none of them ever adequately explain how I feel. I often end up going back on it entirely, yet swiftly I find myself returning to the same conclusion. I rephrase it, but it never really sums up my feelings. I try to visualise theatre that I do like, or have previously liked, and I find myself hating the things that I liked about it. I’m not sure I’ll ever find a way to quickly and efficiently express my feelings towards theatre.

Good job I’ve got a blog then, eh?

I’ve had this thought from well before I started acting. Coming from a working class family and growing up in poverty, going to the theatre was a luxury we couldn’t afford. I never had any interest in classical literature either – it was not something that anyone around me was engaged with, so I read footballer’s autobiographies and the Red Dwarf books instead.

That said, there were a number of things that made me think I would fall in love with theatre quite easily. Firstly, for one very special birthday, possibly when I was 11 or 12, my mum took me to London to see Joseph and the Amazing Technicolour Dreamcoat. I remember being blown away by the energy and the staging. It was something that I’d never seen in person before, and for months afterwards I listened to the soundtrack on my cassette player as I did my paper round. We couldn’t afford to buy the CD so we borrowed it from my friend’s mum and made a copy.

Aged 12 or 13 I acted in a school musical called Blast Off! I remember going to the audition and being the only boy in the room. All the girls sang modern pop songs with perfect pitch, while I stumbled through a hymn that was given to me because I hadn’t prepared anything. I can still remember the nerves. I was shaking and sweating and it felt like ten thousand eyes were on me. The show was being cast by three teachers – my music teacher, my English teacher, and one other that I can’t remember. After making everyone’s ears bleed, I remember overhearing the discussion between the panel. My music teacher said something to them like “I know he can do better than that” and I remember being incredibly relieved to hear that. They made us wait a week or so before the cast was announced (or at least it felt like it) and I had long since given up any idea that I might get a part. To my surprise, I had been cast as the journalist, Clayton.

The only non-singing part in the entire play.

I was also the only boy in the entire cast.

*Cue me going to YouTube to find evidence that this musical ever even existed. I just watched a load of songs and the only one that sounded remotely familiar was the full cast finale – the only time I was allowed to sing.*

I had dialogue in two scenes. I hated giving up my football at lunch times and staying behind after school to rehearse. I had the piss taken out of a lot for that. I was still super nervous and even more so when it came to learning lines. This may have been part of the reason that I never did any acting again until I was 30.

Another thing that scared the shit out of me was that I was asked to flirt with a girl – the secretary if I remember correctly. The secretary in the play that is, not the school. Though I’m not sure who was scarier. As well as being asked to flirt with a girl, it was a girl who was A WHOLE YEAR OLDER THAN ME. She was pretty (though not my type, I knew that even at that age) and she was more confident than any girl I had ever met. I was in the middle of a prolonged period of being bullied at school and so my confidence was non-existent. I also didn’t have any female friends, so girls just confused me in general*.

Somehow I got through the rehearsal period. We did the dress and tech rehearsal, and all went well. The first night went okay, even if we did end up arguing in the interval over who forgot their cue line (it was her). I remember the buzz of the performance, and I wanted to do it again.

Then, on the second night, it happened.

On stage. In the middle of the scene.

We hadn’t rehearsed this.

Is this what flirting is?

Why am I going bright red?

Somehow we got through it. I think she improvised and fed me my line, but I can’t be sure.

I think we did three nights. I can’t remember what happened on the third night. I do remember being incredibly anxious and scared I would forget my lines again.

I didn’t perform in a play again until I was 31.

At uni I learned to play guitar. I’d always had a desire to perform, and so my next idea was to learn how to play guitar and then put a band together. I’d wanted to be the singer in a band since discovering modern indie music in my mid-teens. As a ten year old I had been part of a choir at primary school, and we’d performed in front of 3000 people as part of some big show. I can still remember looking out into the audience and feeling the energy coming back to us. I think subliminally that feeling was still nagging away at me.

At uni I got into the rock scene, and my music tastes got heavier and heavier – stopping at heavy rock, never quite making it into non-commercial metal. After leaving uni I was in a few bands, most of which I put together and sang in, but I was never happy with my voice. I certainly wasn’t the confident frontman that I wanted to be.

As soon as I joined a band in which I wasn’t the singer, I felt a freedom to perform. I bought myself a wireless guitar receiver so that I wasn’t restricted by a guitar lead and I could dance with the audience. I would start shows in the venue toilets (sometimes there wasn’t any visible difference between the toilet and the stage area) and walk out playing the opening riff. I would climb furniture, dance with the bar staff, climb on the drum kit – you know, all that rock’n’roll stuff. It was a release. I loved every minute of being on stage and I think it showed.

Only thing was – I was the odd one out again. Don’t get me wrong – the rest of the band were high energy too. It was why people either loved or hated us. But no one performed. I wanted to perform. I was reigned in a couple of times by the rest of the band, although most of the time they just let me get on with it.

You know that clip of Bottom Live that does the rounds every year on the anniversary of Rik Mayall’s death? Well I had that show, and others, on VHS in the early-2000s. I remember watching that show on my own, folding over and my face aching with laughter. It wasn’t just the script, it was the ad-libbing and rapport between Rik, Ade, and the audience that made it. It put the idea of going to the theatre into my head again. The problem was that no one I knew was interested.

The idea slipped away again.

As it turns out, everyone at drama school is lovely. We shared many of the same insecurities and I like to think we all grew as people together. I look back on my time there as the best time of my life. I met so many great people, most of whom I’m still in touch with (say hi if you read this!) and had endless fun playing in a way that I didn’t think I was capable of.

I wasn’t too concerned at the time. After all, they were just vehicles to help me learn the mechanics of acting. I thought I’d take in as much knowledge as I could, learn to appreciate the craft behind them, and then find stuff I really liked by going to see as many shows as I could.

The problem was that I saw very little theatre that genuinely interested me.

It feels like no one speaks my language. Most “drama” involves situations in which I can rarely empathise. Most “comedy” features hilarious situations that would embarrass even the most hardened of middle-class fathers (you guys!). Issues-based theatre preaches only to the choir. Theatrical devices all seem contrived. People from working-class backgrounds have re-shaped themselves through theatre’s middle-class behaviours, rather than creating their own new moulds.

This year’s Brighton Fringe was the final straw for me. Reviewing theatre shows for FringeReview is always an interesting process for me. It forces me to assess the show neutrally. I’ve never been one for hyperbole – either blowing smoke up each other’s arses or slagging something off simply because it you don’t like it. I love the ethos behind FringeReview because it forces me to think about every aspect of a show, and respect all of the work that has gone into it.

I gave three very favourable reviews this year. But here’s the thing. The one I rated the lowest was the one I most enjoyed.

See, in the cold light of day, there was a lot that needed work. But I can honestly say that I enjoyed that show infinitely more than I enjoyed a show that I gave a “Must See”. In fact, the Must See was the show that I spent an hour simply waiting to end.

So why did it get a Must See? I was very aware that I was the only person in the full-to-capacity audience that wasn’t enjoying it. More importantly, they had, very impressively, completed what they had set out to do. What they promised was what they delivered.

It’s just that, well, what they delivered really wasn’t my thing.

This is no criticism of them, or anyone else. This is simply how I came to realise that I don’t like theatre.

That is, until the last show I reviewed.

The last show – the lowest rated of the shows I reviewed – was the only one that connected with me. Sure, it was rough around the edges and there was a lot that could have been done better, but it spoke to me. Finally.

It wasn’t that it addressed a subject appealed to me. It was that it did it while kicking the audience’s collective teeth down their throats. It told the audience to go fuck themselves. It held a mirror up and forced the audience to recognise their privilege, before punching them in the face with it.

And so that is why I love, and why I hate, theatre.