I’ll be honest. This is more a brain dump/review session for me than a blog post. But if you’re interested in any of the things I’m up to feel free to read ahead…

The past few month has been a bit crazy. I’m not going to go into detail but my personal life has had a few minor emergencies that I’ve had to respond to unexpectedly. And they all happened on my days off. Thus, I feel like I’ve not really had any down time until today.

I’ve also had an influx of work from other sources, which I’ve had to squeeze in as and where I can, and this has proved stressful with everything else going on. Touch wood, however, we’re approaching a place of calm now… 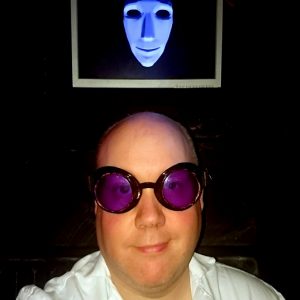 Working towards my acting goals has fallen off my list of priorities this month. What’s quite telling is that I’m not really bothered by that. So much other cool stuff is happening that I don’t really mind that I’m not currently progressing my acting career at the moment, although that’s not strictly true as I have booked on to one workshop in London and I have been working regularly at Bewilder Box.

What’s most fun at the moment is the character I’ve developed at Bewilder Box. This isn’t surprising given the amount of times I play him, but I’ve developed a really strong back story for him, and my panto German accent is improving every day. I’m so confident in the character now that he really feels a part of me, and I think this shows in my performances. I’m also able to gauge the level I should pitch the character depending on the team that is playing. For example, he can be a stern, efficient German stereotype, or a wacky professor. It’s great fun playing with the nuances.

Now things are calming down a bit, I’ll likely turn my attention back towards my acting career again. I do feel that I’m getting a stronger sense of what I want from it now, and so it’s probably a good time to start approaching agents. 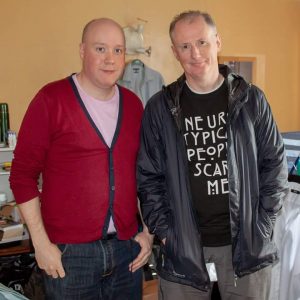 This is the one that’s most exciting me right now. I’ve just recorded the first How To Be A Man podcast with Paul Wady, author of Guerilla Aspies and member of Stealth Aspies, and we had a lot of fun. I’m planning to record a series and release them all together. I’m currently approaching other guests, and I’ve been quite ambitious in who I am approaching. I’m absolutely certain that this podcast will be of interest to a lot of people, and I hope that people will find inspiration in the stories being told. God that sounds wanky. But it’s true.

The Sussex Actors podcast is also back on the agenda. I still need to edit the interview with Tom and Patrick from Theatre Nation. I have started this process, but there are some issues with the sound quality that will take me some time to work through. I hope to get it live this week though.

The interview with Tom and Patrick made me realise that I needed better equipment for the podcast, so I have now invested in high quality kit that I can take out on the road with me. It means I can now record anywhere, rather than being limited to just my bedroom. Seriously – look behind me and Paul in that picture – no one wants to be interviewed with my pants drying in the background!

The interview with Paul then made me realise that I’ve made life difficult for myself in the way I’ve set up my bedroom! I’ve now ordered some moveable microphone arms that attach to my desk, so this should make it easier for everyone when I am recording in my room.

So, the one thing that’s pretty much fallen away completely over the past month is my trips to the gym. I’ve only been able to make it twice. That said, I went yesterday for the first time in nearly three weeks and managed to do a full workout. Not quite to the level I was at when I was in full swing, but then I’m being very careful not to push myself too far and injure myself again. I’ve also had a couple of recommendation of physiotherapists, as I need to get my calf muscle looked at.

When I’m in the gym, I often daydream about being in a wrestling ring as a form of motivation. I guess I’m a little bit worried that if I go to the training and suck (which I inevitably will, being an out-of-shape complete newbie) then those daydreams will become less impressive, and thus less motivational.

There’s a voice in my head nagging at me to drop this as an ambition. Right now I’m refusing to listen to it. As long as my body (read: doctor) allows me to keep going, I will.

Another exciting development is the progress I’m making on the development of my new one-person play. I’m still very much at the stage of generating a structure and working out the correct devices for it, but it’s definitely becoming clearer in my head. For instance, I’ve realised that I need to create a story in my own voice. I know that sounds daft, but I mean it literally. When I perform it, I want it to be as naturalistic as possible, as I think that will be most powerful.

I’m also having fun researching the material. It’s really forcing me outside of my comfort zone, which is vital for what I’m writing.

I’ve done a few shoots recently for Fringe productions recently, as well as my first paid photography gig. I’ve started to put together this portfolio website, although I will develop my own website in due course. It’s something else I’d like to dedicate more time towards, and indeed invest in better equipment.

I think I need a name for the photography business. Any ideas welcomed. 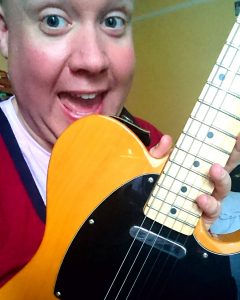 I bought me a Telecaster*, yay! I’ve also been listening to more contemporary country music and letting it truly infiltrate my songwriting. I’m finding my voice more and more – indeed I’ve just written a song minutes prior to starting this blog. I’m up to 14 works-in-progress songs for the album, although I’m probably only confident in five or six of them as they stand, so I may have to expand on my initial target of 16 songs to select a 10-track album from.

I’m thinking it might be time to road-test them, so I might head out to a few open mics around Brighton & Hove soon.

*okay it’s a Squier, but don’t shit my bonfire, all right?