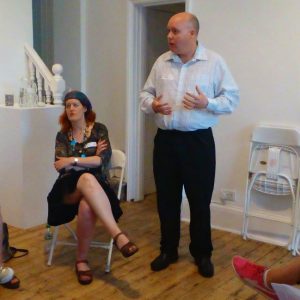 The third of the town hall style debates organised by M/others Uncorked, on this occasion I played a local councillor reluctantly hosting an open meeting to discuss cuts to three non-essential NHS services locally.

Recruited as Llewellyn Roberts, quantum scientist at the Bewilder Box, I welcome the teams and support them throughout the game. You can think of it as a sci-fi version of The Crystal Maze. Throughout the game I also voice the interactive supercomputer D.A.V.E.

Playing the part of corrupt council worker David Martin in this interactive political debate, this was a follow-up to Read, not Greed and centred around a proposal to build luxury housing on a much revered local park.

Performing at the world-famous Glydebourne, I played the role of an Arabian prince, mingling with guests prior to the start of the show.

A unique interactive debate in which I played the part of James Beacon, a Starbucks community development rep. The conceit was that the local library was to be closed, and that Starbucks were offering to keep it open by covertly privatising it.

Playing the part of Gabriel, the host of this escape room game that was described as “The Crystal Maze on acid”. As well as looking after the technical aspects of the game, I also introduced the story by creating an atmosphere of mystery and suspense.

Insomnia was a partially-immersive experience. I played the part of a host frog (don’t ask!) that welcomed audiences to the show at the start and the interval, as well as at the end of the show. 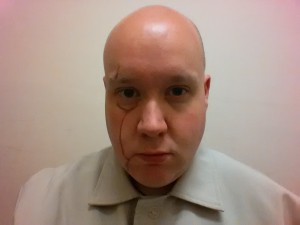 I played the role of Blofeld, welcoming guests and taking photographs at this James Bond themed casino evening.

I was a scare actor in the critically-acclaimed Shocktober Fest in October 2015, building on a similar role he undertook with London Tombs in October 2013.

Throughout 2015, I featured in a number of shows as multiple characters in shows by Brighton Forum Theatre Collective, who are now known as Speak Up! Act Out!

I played the role of Rupert, the train conductor. Keeping the children entertained while on their journey to the “North Pole”, this involved improvising with children, adults and other actors.

I promoted the show as a psychiatric doctor on the streets of Brighton during the Brighton Fringe festival.

In early 2013, I assisted with devising The Illumination, an immersive experience about a cult, created by members of Velvet Loop. The show was well received by audiences and critics.

The Rise and Fall of Geo Goynes – September 2013

In September 2013, I played the part of Earl Dayton, an underground investigative journalist leading a team of audience members in a task to find Geo Goynes. The performance was part of Brighton Digital Festival and involved liaising with a team of five audience members via headsets connected to the whole team. The team then roamed the streets looking for information about Geo Goynes and the new software she had developed, while Earl Dayton maintained contact until he was arrested.

Innovative, technologically advanced and highly interactive, this was a highly original piece of theatre produced by Root Experience.

In July 2013, I played the part of Matt in The Building at the New Venture Theatre. The Building was a devised show in which the audience were taken around a block of flats and were given an glimpse of other peoples’ lives.

Matt was a council maintenance worker taking a group of local councillors (the audience) around the building so that they could see the living conditions that some council tenants were exposed to. This involved improvising in character with not only the audience, but also members of the public and neighbours of the New Venture Theatre when the tour took the group outside!

The performance was well received by audiences and critics alike. Local newspaper The Argus printed this glowing review of the show.

I’m a regular on the improv drop-in circuit in Brighton, attempting to keep my skills sharp for when they are needed. You can often find me at Iron Clad Improv on a Sunday evening, and I often pop up to London for workshops. In 2011, Guy completed a musical comedy improv course with The Maydays.