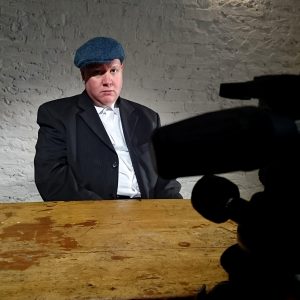 It’s been a pretty manic couple of weeks. Generally, things are progressing in the way I want them to, but I’ve felt overwhelmed on several occasions this last fortnight- not least when I contracted this damn virus-y thing.

It all seemed to be going so well. I was into a (sort of) gym routine – starting to feel some gains and not injuring myself. I was working regular hours at Bewilder Box (and loving it – I can’t speak highly enough of the Daves that run it). I did some filming as “Mad Frankie Fryer”, rival to the Krays, in a new short film Clued Up. I went to the Brighton Fringe launch party and did lots of networking. And I managed to complete the Hove Grown brochure and upload it to the website without having a breakdown.

Then my stomach and brain colluded one night to ensure that I am aware of my own mortality.

I exaggerate, of course. But it did mean that I had to switch off properly for a few days and just rest up. Sleep has been on and off – some nights I’ve had two hours, others I’ve had twelve. It meant that important festival admin like email and website updates have been behind schedule, but I think I’m on top of it all now.

The filming was my personal highlight. My showreel is looooong overdue an update, and I’m keen to showcase more than just my comedy characters. Playing an intense cockney gangster is about as far away from my existing showreel as I can get, and for the first time ever on camera I was genuinely happy with my performance. I can’t wait to see how it looks. Huge thanks to Gem McNeil for giving me the opportunity.

I’ve also launched a Patreon page for SussexActors.co.uk – the forthcoming rebrand of BrightonActors.co.uk. The website needs an overhaul, but I don’t currently have any funds to make repairs or increase the quality of the functions on the site. In order to repay the people that pledge support (from as little as £1 per month), I’ve started recording some podcasts. The first two have been very well received, and I’m pleased with my production skills so far. I’ve recorded, edited and released them both within a few hours, and I have a number of interesting guests lined up for future recordings. The aim of the podcast is to provide actors with information on ways that they can generate a paid income by using their acting skills in non-traditional routes. In the first podcast I spoke with David Middleton, co-owner of Bewilder Box, and in the second I spoke with Christophe Philipps, who has been making a steady living from acting work for a number of years.

I’ve really enjoyed the process of recording the podcasts, but there are a few things I need to work on. Firstly, I hate my presenter voice. The first interview was slightly stilted, probably because I was interviewing my boss. The second was more relaxed, yet I still slipped into a more formal tone from time to time. I guess I’ll relax into it as time goes on. I also need to find some more suitable intro music. The music I’m currently using is free stock music, and it sounds like a weekday morning TV intro. That probably actually works quite well with my presenter voice, but I’d like to give it a bit more of an edge as it develops. I’ve never been a fan of vanilla.

My goals for this year are suddenly coming into clearer focus too. Once I have another scene for my showreel and finally get my headshots sorted (courtesy of the wonderful David Myers), I’ll start approaching agents and casting directors. I’m planning on (finally) starting wrestling school in April – assuming no more injuries or illness – and once those two goals are lined up in my sights I’m planning to start dropping other commitments.

I’m feeling incredibly grateful that I’m in a position now whereby I can pick and choose my work. I can’t tell you how much I love working at Bewilder Box, and the way the team operates has finally given me the flexibility to be able to concentrate on the things I really want to do.

I’m hoping to spend more time writing too. My next theatrical step is to write and produce my own one-man play, and I’m looking forward to Robert Cohen’s workshop on the subject at Hove Grown. I’ve had lots of writing ideas lately, including ways to revise my existing works, and maybe at some point I’ll put on some more full-cast shows too.

Once everything Hove Grown-related has settled, however, the first thing I’ll be doing is taking some time out for myself. I’ve not done that for a LONG time, and I know it’s the best strategy for my career long-term.