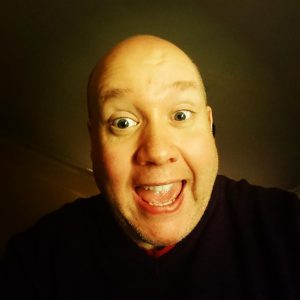 I’ve just watched the most tedious video emailed to me by the organisers of a well-known acting conference, saying that it would change my life.

I can only assume that they think I’m a naive 21 year old drama school graduate who needs to be told that my mindset affects how I portray myself, and thus how I am perceived in the world.

But hang on, if drama school doesn’t teach us this (“NO DRAMA SCHOOL TEACHES YOU WHAT I’M ABOUT TO TELL YOU”), then what does it teach us? Forgive me, but don’t we spend years learning about how our inner thoughts and our external behaviours are linked? Did I miss something, or is that not what acting is?

I’m getting sick of snake oil salespeople in this business. Yeah, I know, some of it is useful to other people, and I don’t begrudge them that. And I’m sure that the guy in the video would be reading this while shaking his head and saying how my negative attitude won’t get me anywhere. And he may be right – but I don’t see it as a negative attitude and I don’t have a confidence problem. I see huge holes in this entertainment industry, and the pitfalls awaiting people more vulnerable than I, and I choose to prioritise repairing that damage ahead of personal gain.

“You’re just making excuses for not committing to success.”

Oh shut the fuck up. Actually, I’m doing quite the opposite. As anyone that has ever actually been remotely successful in any field knows, you don’t reach success without hitting a few walls. As you become more experienced you learn to spot the walls before you reach them, and so you spend a little time either: a) psychologically preparing yourself for the smash; or b) navigating a route around the wall.

Sorry – slight interruption. I made the mistake of giving this fool my email address. His follow-up email just popped up in the corner of my screen and now I’m being shouted at IN ALL CAPS and bold highlights telling me that he GUARANTEES SUCCESS.

Anyway, back to the wall. Heh. Almost literally at times. What? Sorry, I’ll continue.

Sooner or later we’re going to have to admit that many of the attitudes that we hold in this industry are both conservative and harmful. We talk about acting like it’s some kind of advanced way of living, yet we put ourselves and our colleagues through unnecessary emotional turmoil on a daily basis. And yes, the “successful” ones are the ones that can manage this stress better than others. It’s all well and good saying that anyone can learn to manage stress, but different lifestyles lead to different types and intensities of stress. In my opinion it’s a big part of the reason why the industry is so dominated by the middle classes. If you can live at home with parents/live off your investments/rent out the house you were bought then that is one seriously huge stress removed from your life. The reality is that this means that “success” for someone from a modest or challenging background could be significantly different to someone from a more settled background.

I’m not explaining this very well. Let’s use that slightly cheesy video that’s been doing the rounds recently. Although this is very American, you can change many of the questions to suit similar social norms in the UK, and you’d have a very similar result.

So why am I ranting about this? Well, it’s because I’m sick of seeing actors and other acting professionals saying things like “don’t moan” and “don’t complain”. Why the hell not? Because it brings the atmosphere down? Because you want to carry on living in your imaginary perfect world?

Not moaning and not complaining is unhealthy. It means that someone in your team most likely is keeping something locked up inside and doesn’t feel comfortable talking about it. I know from first hand experience of working with young actors that this is particularly true of recent graduates. We ingrain in our young actors a belief that if they try to raise an issue or objection to something, or express dissatisfaction at goings-on in the rehearsal space, that they will suffer. They will be castigated by their fellow cast members and they will be held responsible for “bringing the mood down”. They fear they won’t work again, that they will be sacked, that may have monies docked or that their name will be tarnished in acting circles. This leads to stress and anxiety.

Now just to be clear, I’m not saying that every rehearsal should be a moaning competition, or that we as actors shouldn’t have to accept that there will be times when we have to do things that we don’t want to – that is all part of the job. I am also not saying that we should express every single annoyance or behave like martyrs – I’m saying that we constantly hear about the rehearsal space being a safe space, and so often it is not.

In a safe space, you will be working with people that are empathetic. People that will listen when you need to moan. People that will empathise when something in your personal life is playing on your mind so much that you have no choice but to bring it into the rehearsal space. By denying these realities, we adversely affect our rehearsal process anyway. It’s far better to let your cast and crew be open about their worries at the start of a rehearsal and allow them time to process their feelings before getting stuck into the work that needs doing, as this assists with helping the actor adopt a neutral starting point.

When directing, if I detect an amount of stress in the room, I use a technique that I learned while studying person-centred counselling. I set aside 15 minutes at the start of the rehearsal whereby the group sits in a circle and anyone that wants to speak, can speak. They can talk about anything they want, and no one else is allowed to ask them any questions or answer any points they bring up. If no one says anything, the 15 minutes remains silent. People are not encouraged or discouraged to speak – they only speak if they want to. This gives everyone 15 minutes of contemplation to work through their baggage, and means that the group has complete control of the energy in the room. On more than one occasion that I have used this, the comments that have come out have been feelings of positivity, rather than negativity. It’s amazing how a person-centred approach can empower people.

I’ve not explained that very well because I’m starting to flag a little bit. Feel free to contact me if you’d like to know more.

It’s so simple, yet something that is constantly overlooked by directors, producers and workshop leaders for fear of “bringing the room down”. When done correctly, it is quite the contrary – it is incredibly useful for bringing the energy in the room up.

There is an often unspoken expectation in the rehearsal space to “leave your baggage at the door”, some may even call it an expected agreement.

Personally, I’d much rather my cast bring the baggage in and make it part of the furniture. Nothing to hide = nothing to fear.

EDITED TO ADD: Here’s a better version of my incoherent ramble: