Is there a more frustrating part of the job of an actor than learning lines? Does anyone know of a magic spell that will ensure the words go in, in the correct order, and without paraphrasing?

I have to keep reminding myself that they’ll go in, they always do. And I’ve reached the point now where I’ve given up on trying to work with people and accepted that I have to learn them on my own, in my own way.

This is symptomatic of an issue that I have with this industry. Given that we spend years learning how to be empathetic towards others, how to think like other people, and how to understand their behaviours, I find it amazing that we don’t educate actors in learning styles, or allow for adjustments based on learning styles. Now I’m aware that there is some controversy over whether or not learning styles exist (at least in the Visual, Audio, Kinaesthetic sense), but what is not up for debate is that teaching styles are impactful. So if we are talking about self-learning lines, we are also self-teaching. Yet we spend no time learning how to teach ourselves. 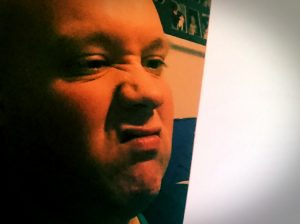 We all go through our own journeys when it comes to learning lines. Most actors I know will already know their preferred learning style, and (purely anecdotally) most actors I know trust that the lines will truly embed once rehearsals start. Some companies express a desire that actors ARE NOT off-book at the start of rehearsals, while others make explicit demands that we are.

There are two things that I find frustrating about line-learning. One: actors aren’t paid to learn lines. Sure, technically we are, because it forms part of our contract, but if you’re doing a short-term job and being paid for a single day on a shoot, for example, it may take you another day’s worth of hours to learn the script. Therefore you’re actually be paid half the daily rate that has been agreed. This means that someone that learns lines quickly is being paid more than someone that isn’t. This wouldn’t bother me if it wasn’t for the second thing: In my experience companies very rarely take responsibility for helping their actors get off-book. For instance, I know that if I can work with another person, I can get off-book very quickly. If I work alone, however, that process is long and arduous. I don’t have anyone close that I can call on to work through lines with me, and on the occasions that I have asked actor friends, they are usually unavailable due to their own commitments. Sure, I have a line-learning app, and that has certainly made things easier, but it’s so robotic that it doesn’t flow in a way that working with a scene partner would.

Another hidden issue is that if, like me, it takes you a long time to learn lines, this is time that you have to allocate in your diary. In my case, that means having to turn down other paid (non-acting) work during this period. This means I have to think long and hard about taking an acting assignment with a substantial number of lines, because realistically I can’t work a day job and then learn lines in the evening, and I have to pay my rent somehow before the acting contract starts. I know for a fact that lines do not go in well when I’m tired.

My final frustration comes from my own attitude towards working in teams. When working on a production, I will do anything I can to support my colleagues. I mould myself around the team’s needs in the knowledge that by supporting individuals within the team, I help make the team stronger. So although I live my life by not expecting anything of others, I do find it incredibly frustrating when my requests for colleagues to help with line-learning are met with a negative response.

When I was at drama school, it was constantly emphasised that you’re only as strong as your weakest link. I can’t help but feel that if our attitude towards learning lines was changed, and actors were educated in learning and teaching styles, this wouldn’t be an issue at all. At present, the common attitude within the acting world seems to be “It’s your problem, if you can’t hack it, leave the industry.”

Then I remind myself that despite its often liberal facade, this is actually a very conservative industry that is incredibly resistant to change.

I hope that in the not-too-distant future we will look back at the state of this industry in the same way that we once looked at other forms of achievement: by recognising that the end product can be not just as good, but possibly better, by working with someone that may need additional support – if only we take the time and give it to them.