My mind is all over the shop at the moment – in a good way.

I’ve always found that I’m more motivated when I have several projects on the go, so that I can switch between tasks when I get frustrated. It’s the reason I keep a guitar next to my desk- so that when I get frustrated I can turn my attention to something else productive. Many a song has been written in this situation.

I do find that I have to reign myself in from time to time though. Sometimes I have too many ideas on the go, and when that happens I have a tendency to freeze or become overwhelmed. It can then take me a while to get back on track, which is incredibly frustrating.

But as I said, I have just the amount of stimulus at the moment, and I’m excited about the year ahead. 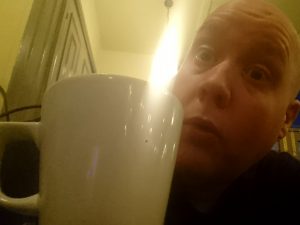 An aside: I’ve just realised that despite the fact that I keep checking my phone to make sure there are still (Brighton Bikeshare) bikes available outside, I can obtain the same information by turning my head 90 degrees to the left. What do you mean I spend too much time looking at my phone? Oh man, I only came in here to warm up and I’ve been here 45 minutes already.

Anyway- Tomorrow I’m taking some publicity photos for a fellow comedian, before continuing my training at Bewilder Box. Two of my favourite things to do.

I’m also working on Hove Grown, writing my album and preparing to record some new podcasts. On top of that, I’ve got myself into a gym routine, had clearance from my doctor to start wrestling, and booked a handful of promo jobs, so it’s an encouraging start to the year.

The reason I’m cycling, by the way, is because my car has just gone into the garage. The cylinder pump on the clutch has gone, so I’m waiting to hear how much the repair is going to cost me. Apparently it’s a simple fix, but it’s a cost I could do without right now. On the plus side, I have at least fixed the broken aux socket, which means I can listen to more of the cool podcasts I’ve been hoarding lately.

I appear to have lost my train of thought. This is the problem with blogging on my phone – I lose track easily and can’t scroll back and re-read what I have written easily. Hold fire, I’ll be back shortly.

Aaaaand I’m back. Okay, so that wasn’t so much as back shortly, as taking a six-hour diversion, but it has helped me focus a little bit. Oh, the irony.

So I decided that my bike ride home would be in lieu of the gym today. I mean, aside from anything else, it has to be. See, this weird thing happens to my legs when I ride bikes – after a while I lose all power from my thighs. Stop laughing! I’m serious. I really can’t seem to communicate it to anyone, but my thigh muscles just seem to lose all strength and then I can’t push the pedals round. I was reminded of this in the gym the other day, when I tried to run on the treadmill after cycling. Nope. Legs weren’t having any of it. Had to stop. It’s weird. Only happens when I use a bike.

Tomorrow’s photoshoot should be fun. I’ve brainstormed some ideas and found some pictures to use as influences, and it’ll be good to work with another creative person’s input too. I’ve not really approached a photoshoot like this before, so I’m more excited than I usually would be. We’re currently forecast lots of sun, which may make shadows problematic as we’re shooting outdoors, but it’s due to cloud over later so hopefully we’ll get a nice mix of pictures.

I had a photoshoot of my own yesterday. I’m being featured in an upcoming “Faces of the Fringe” exhibition at Brighton Train Station, so that’s nice. It was a good opportunity to have a chat with a professional photographer as well – I try to take every opportunity to learn from those with more experience than me. I mean, I say that, but I also decided against going to a photographer’s meet up last night because… well… I couldn’t be arsed. Ho-hum.

Oh, and I’m doing some work with Brighton Film School next week. I’m playing two parts in two scenes, and the school’s students will direct me as part of their assessment. I’m enjoying the challenge of learning two scenes and playing two very different characters, and it’s one of the rare occasions when the fact that I haven’t seen two iconic films comes in really handy, as they’ve asked for us to avoid watching the scenes if we haven’t already.

Yeah, me too. Bedtime, methinks.