I’ll be honest with you. I have no idea what this blog is going to be about. I just had an urge to write, and as the cat has, for once, curled up in her bed instead of on my lap (I give it five minutes until she hears the typing and tries to stop me), I thought I’d write something.

It’s not that there wasn’t a stimulus. I remember quite clearly thinking in the shower that there was something I should blog about today- I just can’t for the life of me remember what it was. Something to do with writing comedy, I think. Possibly an extension on yesterday’s blog. I can’t remember.

This is the bane of my life. I suppose it’s the creative’s curse – so many great ideas that get lost in the shower, on the pillow, or walking down the street. I find it doubly annoying because I think I’m quite good at taking ideas and padding them out, it’s just the concepts that don’t come along too often for me. And yes, I’ve done the thing where I have a notepad by my bed, and one in every bag, and my phone is full of notes about different show ideas. It just seems that my truly great ideas are bound not to be made. At least, that’s the excuse I’m sticking to.

I can’t wait for normality to settle back in. I genuinely dislike the festive season for a whole multitude of reasons, but the main one is that I feel that it interrupts my creative flow. The flip side is that I usually find myself with lots of time to write, but I need the stimulus of talking to other creatives during this process, and the festive season halts that. I wish that I could just hibernate and ignore Christmas and New Year completely, but sadly that’s not practical as loved ones have other ideas. It’s a real struggle for me though, and I’ve yet to find a way of making others understand just how difficult I find it. I always seem to come across as someone who is a bit of a grinch, or who is just playing. 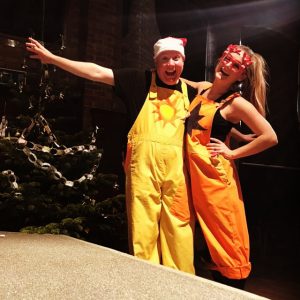 Of course, it does present one positive opportunity for me – the opportunity to perform. I’ve been lucky enough to be employed in acting roles I’ve enjoyed for the last four Christmases. Contrary to many of my thespian counterparts, I love the opportunity to present silly, over-the-top characters to children. Seeing how much they get into the show is so much fun, and interacting with them is one of my favourite parts of the show. I’m never quite sure just what they’re going to come out with, and seeing their reactions when I talk back to them is priceless.

The other positive about this time of year is it gives me a chance to reflect on my ongoing projects. I’ve made some big decisions about where I want to be, and the next couple of months will be spent trying to realise that vision.

Nope, still not remembered what I was planning to write about.

Oh, maybe I have…

Right – here’s the thing: I’m turning the filters off.

I – despite my rantings in last year’s show – spend far too much time trying to be professional. If you saw my show last year, you’ll know how much I resent being forced to behave in certain accepted ways in the name of professionalism. In the show I explained how it’s a vague term used to make you do the things that companies want you to do, and it slowly erodes away your personality and humanity.

This isn’t one of those “I always speak my mind” type deals made by arseholes that never say anything nice. It’s simply that I’ve decided to be myself in all circumstances. I’ve been working like this for about six months now. I’ve likely made “inappropriate” comments (my humour oftens comes out badly in “professional” situations), but I also feel that I’ve been far more humane.

I’ve always been like this to some degree, but I think I’ve felt some pressure as the figurehead for Hove Grown and BrightonActors.co.uk to behave in a way that isn’t me.

I’ve gone back to a place where I take myself too seriously, something that I felt I left behind when I started acting, and that’s not good for comedy. Those that know me will understand where I’m coming from, and those that don’t will choose to take offence at whatever I say anyway, so fuck ’em.

I’m not coming across very well here, am I? I sound like an angry young man who’s just realised he doesn’t have to please his parents any more. I’m not. I passed that stage a long time ago. If anything I’m getting more towards the grumpy middle aged man stage. I think I’m just reasserting myself to myself.

I also think I’m out of rant.

On a separate note, if we’ve not spoken for a while, let’s meet up for coffee. I’ve got a fair amount of free time in January and I’m working on lots of cool stuff that we should talk about working together on.