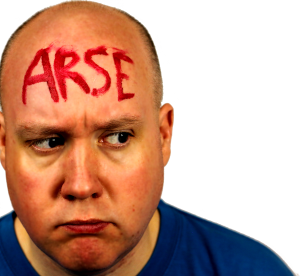 Me again. Yeah, I know I said I’d start blogging more regularly but even I didn’t expect another one before the year ends. Okay, so there’s only an hour left as I start writing this, and by the time it’s finished I might have missed that deadline, but even so, two blogs in a week is pretty good going even if I say so myself.

Full disclosure: I’m watching WWE Clash of Champions as I write this, because I know how to have the best New Years Eves. I couldn’t help but notice that they went with the hashtag #WWEClash, and not #WWECoC. Can’t think why.

I’ve spent the last couple of days working on material for my new show, provisionally titled The Authority, and as usual the material is coming thin and slow. I think I’ve written two decent gags. Well, at least one. And that only works if you know your obscure wrestlers from the late nineties. I’m not discouraged though. I was listening to Brendon Burns’ Dumb White Guy podcast the other day – ironically mainly because his guest was indie wrestler Colt Cabana – and they were discussing Colt’s transition from wrestler to comedian. It sounds obvious, but Brendon made a remark about writing jokes being the hardest part of being a comedian, and that really struck home.

I’ve known for a while that I’m just starting out on this journey, and I’m still trying to figure out what my style is, and what content works best for me. I’m particularly conscious of not coming across as preachy, as I know I’ve got a lot to say, and most of the time comedy isn’t the right outlet for that. I have to be open to new ways of saying it. I know a lot of comedians (particularly those just starting out) that have fallen into this trap, and so I’m super-sensitive to it, while at the same time being fully aware that I’m not above those same mistakes. Hell, I’ve only played a handful of five minute open mics, and then went straight into my debut one-hour show.

Speaking of which, I recorded my show every night at last year’s Brighton Fringe, and I’ve yet to build up the courage to listen back to it. I think I’ve got a good idea of what worked and what didn’t: I’m aware I fell into the preachy trap a little, and I even commented on one night that it sounded more like a TED talk in parts.

Anyway, my point is that the podcast reinforced that writing comedy is bloody hard work, and like every other form of writing, it requires lots of time for practice, performance, and editing.

I’m also super-sensitive to those other pitfalls that new male comics often fall into – nob jokes, social media commentary, obvious political stuff, crap one-liners and generally going over old ground. The problem is that I have to go through all of that to get to the gold.

I’m also aware that Brighton & Hove has an amazingly supportive comedy community, which is a fantastic thing to be part of. The danger with that is that as soon as you step foot outside of the city, you’re up against it. There are also a million comedy nights here and it would be easy to get stuck into a pattern of playing the same material to the same audiences (often made up of comics) over and over again.

So what’s the solution?

I’ll play the open mics (and I’ll enjoy them).

I’ll perform the preachy stuff (until I realise I’m being preachy).

I’ll write the nob jokes (and probably won’t perform them).