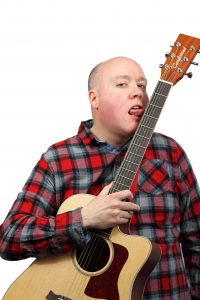 Well, 2017 certainly was an eventful year. And on the whole I guess I have to take it as a success.

2017 was the first year that I’ve been fully self-employed and survived. My last attempt ended badly with me going back into part-time work with a shit-tonne of debt, but by building on the experience of that trauma, this time I’ve managed to make it work.

I blogged at the end of 2016 about leaving part-time employment following my being cast in TIE panto, and that was the catalyst I needed to start 2017 with a bang. I could finally afford to join Spotlight, I signed up with the Actors Guild and did a handful of workshops, and then before I knew it, Hove Grown was here.

I debuted my first hour-long comedy show Guy Wah: Professional Arsehole at Hove Grown before developing it at Brighton Fringe, I performed in the glorious surroundings of Glyndebourne, I took part in a couple of theatrical interactive debates with the wonderful M/others Uncorked, did some immersive family entertainment with Acting Moon, and then came full circle when I ended the year doing TIE panto again.

Outside of acting I managed to secure some interesting promo work, from merchandising jobs to presenting the National Citizen Service to school assemblies. 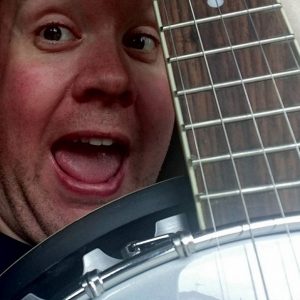 Music-wise, I’ve made some good progress on the album I’m writing. My target is 16 songs, which will be narrowed down to no more than 12 for the album, and so far I’ve written seven that I’m happy with. I’ve not put a deadline on this, it’ll be ready when it’s ready.

Going forward I’ve done something that I’ve never done before – I’ve written myself a list of goals for the following year. I’ve always shied away from putting clear targets down, because as long as I’m working on projects I enjoy, I’m usually more than happy. So why now? Well, there are a couple of things that have been nagging away at me – things that I’ve wanted to do for a long time, and now it feels like they’re within reach I feel like I should keep them within my sight. I’m not going to share them publicly, mainly because I don’t think they’d be that interesting to anyone else, but also because I know how quickly my life can get out of hand and I don’t want people who don’t have the full picture asking me why I haven’t done them constantly.

Some obvious acting goals include getting new headshots and a new showreel, and finally getting myself an acting agent. I’ve always been scared of agents (only in the sense that I’m strongly independent and I fear having to explain to someone that there are well paid jobs that I don’t want to do) but I know that if I’m to move forward with my acting career, I need to find one sooner rather than later. I’m also picky about who I will and won’t work with, so finding the right relationship here is going to be key.

I’m now lucky enough to be in a position where I don’t take work unless I want to do it. I’ve no idea how long that will last, but I’m sure that it’s resulted in a higher quality output from me, and I’m definitely in a better place emotionally than when I was tied to even part-time working hours. It can be scary not knowing whether or not you can pay your rent from month to month, but having completed a calendar year without help, I’m starting to feel more relaxed about it. I should also say a huge thank you to the handful of people that threw work my way on the couple of occasions that I did find myself stuck.

So what’s next? Well, one thing I would like to do this year is find more time for my photography. I felt like my skills were developing quite rapidly over the summer (even if I did annoy people by having the camera with me 24/7) and I’m hoping to create some products to sell in the new year. First things first though, I need to collate all my best work into one place, and my photo filing system is shocking…

I’m also working on my next solo show. It’s likely to debut at Hove Grown, alongside an improvised show I’ve been working on with Lionel Clark, who I first worked with on Housemates – The Sitcom back in 2013. I’m hoping to do more acting this year in general, so I may dip back into the amateur scene if I manage to secure enough non-acting work. Oh, and I’m due to start work as a host for an escape room game in January too.

Finally, I’m working on a new podcast that has become a passion project of mine, and I’m hoping to get some completed episodes out before the end of January.

Anyway, that’s it for now. I’m hoping to blog a little more in 2018, if for no other reason than to get me writing regularly again.