Today was a day I’ve been striving to reach for a couple of years- I handed in my notice at my day job.

This week I was lucky enough to be cast in a TIE panto tour in December. It’s not the West End, but the volume of work means that I’ll be able to sustain myself for a couple of months. Sure, it’s a risk, but it’s one I need to take right now – for my sanity aside from anything else.

I’m not going to go into details about the day job, but it’s fair to say that I’m a square peg in a round hole. However, more than that, it was eating my energy, and the frustration I was feeling meant that I was not being the best I could be in any area of my life. The inflexible nature of the job meant that even though I’ve only been working there 1.5 days a week, I’ve been unable to apply for acting work if either the audition or production dates fall on a Wednesday or a Thursday.

Go and look at some castings now. You’d be amazed how many dates fall on those days.

I can’t pretend that I’m not anxious about the next few months. I’m certainly more prepared than the last time I did this, but the fallout of that period still plays on my mind.

In late 2013 I moved to London. I went there without any money, without any work, and without any real connections. I thought that my experience in networking and finding work would see me through, but it didn’t end well. I had a fractious relationship with an unreasonable landlord and a couple of health problems that ultimately ended in a minor breakdown and my speedy return to Brighton. More than that, I was acquiring debt by the second, and I had realised that me and London don’t mix for long periods.

Most successful freelance year so far 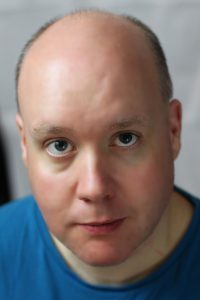 This time is different. This year has been my most successful for freelance work so far, and we’re only just over six months in. I’ve actually been in the very privileged position of being able to turn work down for a number of months, so I’m hopeful that I won’t find myself in the position I found myself in before.

I’m also working hard on my photography skills, in the hope that I’ll be able to maintain a second freelance career alongside acting. (See the self-taken headshot to the right)

I’ve got a couple of acting bookings for the early part of the year already, so I’m confident that I’ve only got small financial gaps to fill.

I’m planning to use the next couple of months to get a number of things in place to get my back up to speed. Namely:

(Brighton &) Hove Grown 2017 is scheduled for 24th March – 2nd April 2017, so I’ll be working solidly with Sweet Venues between now and then. I’m planning to have my own one-person show ready to perform then too, which I’m hopeful I’ll be able to take to both Brighton and Edinburgh Fringes next year as well.

I’m also teaching my Acting Skills for Life workshops – both through ZLS Theatre, and at a couple of local non-profit organisations.