It’s two-and-a-bit weeks since I moved to London. All in all things have been going really well – I’ve had a few auditions, met a few cool people, and got myself a really fun job working as a professional scarer.

However, this Halloween things got a little bit too scary. For me.

I was going through a routine I’d been through half-a-dozen times that evening – standing in the dark end of a tunnel, lights flashing on and off, dismembered heads hanging from the roof… 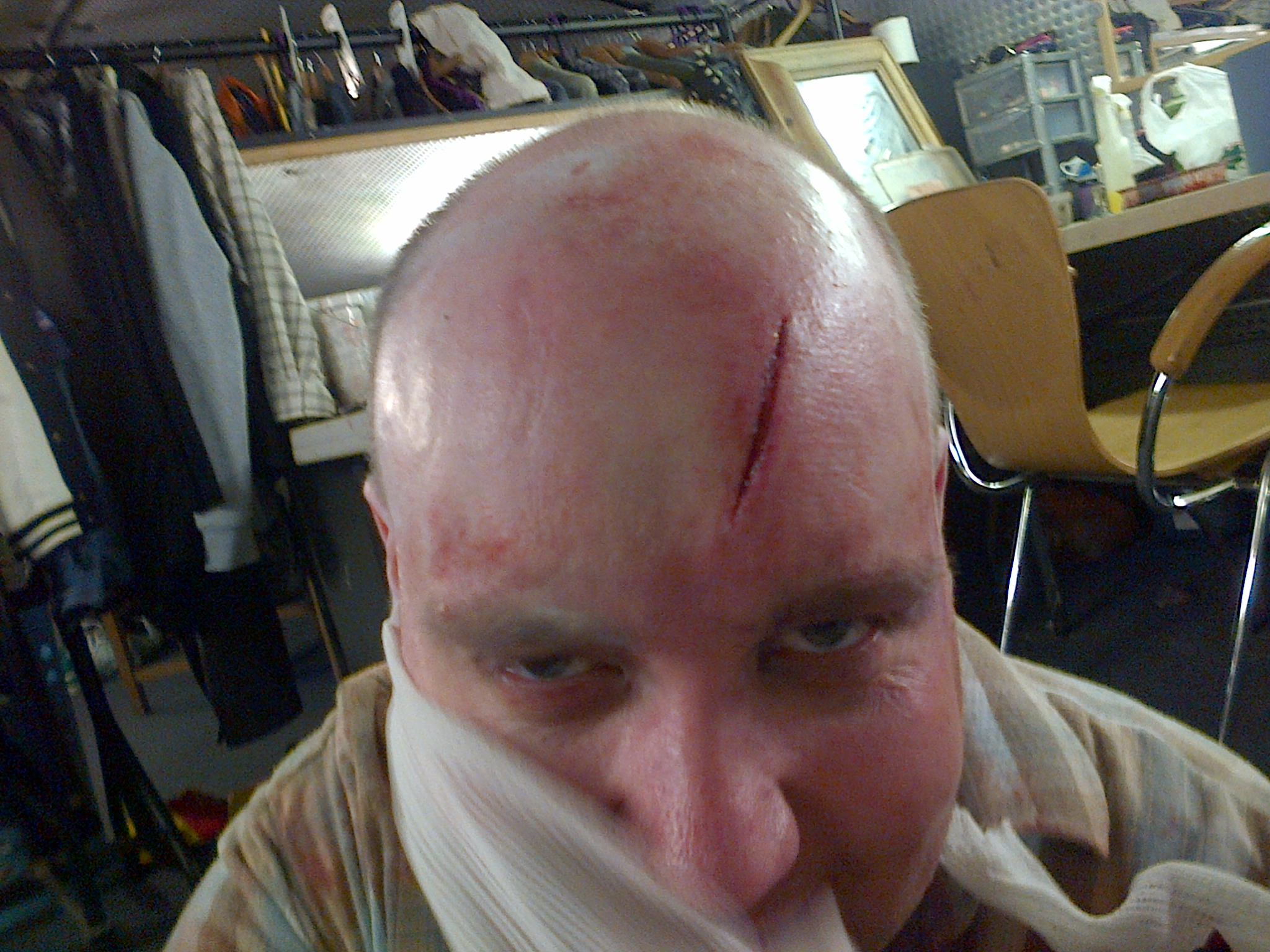 As far as impacts go, it didn’t feel too bad at the time. Just a smack of my head against the wall. Seconds later, however, I was bleeding all over the floor. I managed to exit through one of the trap doors, running past a group of audience members who had just arrived. That was when I heard the biggest scream of the night. However, unbeknown to them, this wasn’t a deliberate scaring tactic.

I ran into the adjoining room and found a member of staff with a radio, who immediately radioed up to stop any more audiences being sent through. My head was pouring with blood and all I could think of was how long I’d got until I passed out through blood loss. I went into the green room and by some sheer stroke of luck, Amanda, a trained first aider, was arriving for her break.

Amanda was amazing – if you’re reading this Amanda, I really cannot thank you enough. Amanda kept me calm and cleaned up the wound, and put pressure on my forehead to stop it bleeding. Front of house called an ambulance and Amanda, Owen and various other team members helped keep me calm while we waited.

Because I didn’t lose any vision, didn’t have any internal bleeding, and didn’t pass out, it soon became clear that my condition wasn’t critical. I managed to stay awake and keep talking, and after a while I took the bandage off and took the above picture so I could see the damage for myself. It looked totally different to how it felt. 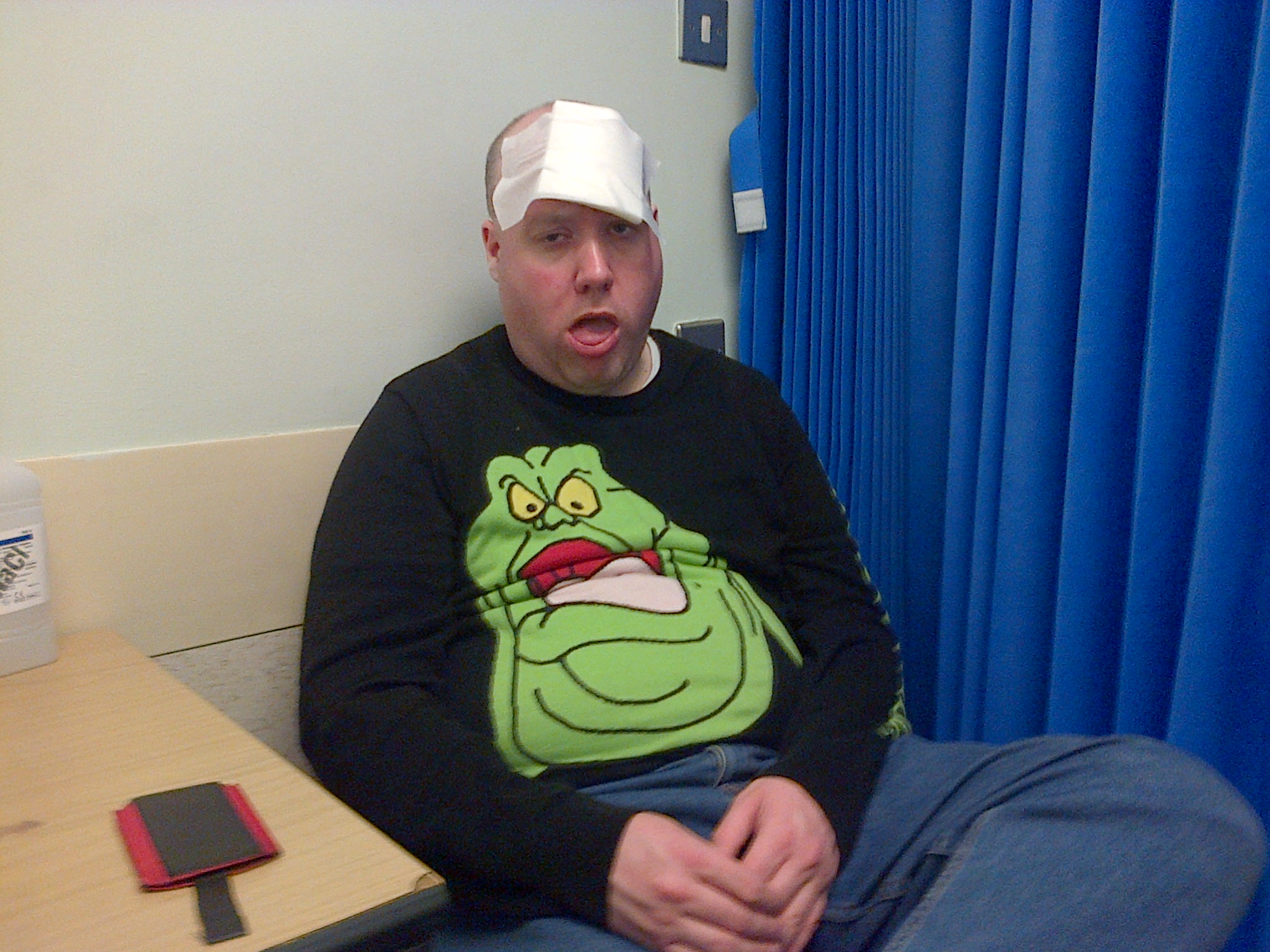 We found out that the ambulance was going to take around 45 minutes to arrive, so James, the manager, drove me to the hospital instead. Maddy, my partner, was staying with me in London, so I called her on the way to the hospital and asked if she’d like to have a crazy Saturday night out in A&E.

The assessment nurse and her student assistant thought it was hilarious, and said they’d definitely be checking the attraction out. I also spent the evening being called ‘Welsh Guy’ because the stern-faced man on the check-in desk entered my name on the system incorrectly. Not just with a spelling mistake, but by getting my surname and first names the wrong way around.

I was given a fresh bandage and a quick clean-up, and then after a while the doctor (surgeon?) arrived to stitch me up.

The cut was very deep, and the doctor/surgeon had to use the maximum amount of anaesthetic allowed to numb my head. Eleven stitches and a tetanus jab later and I was free to leave. 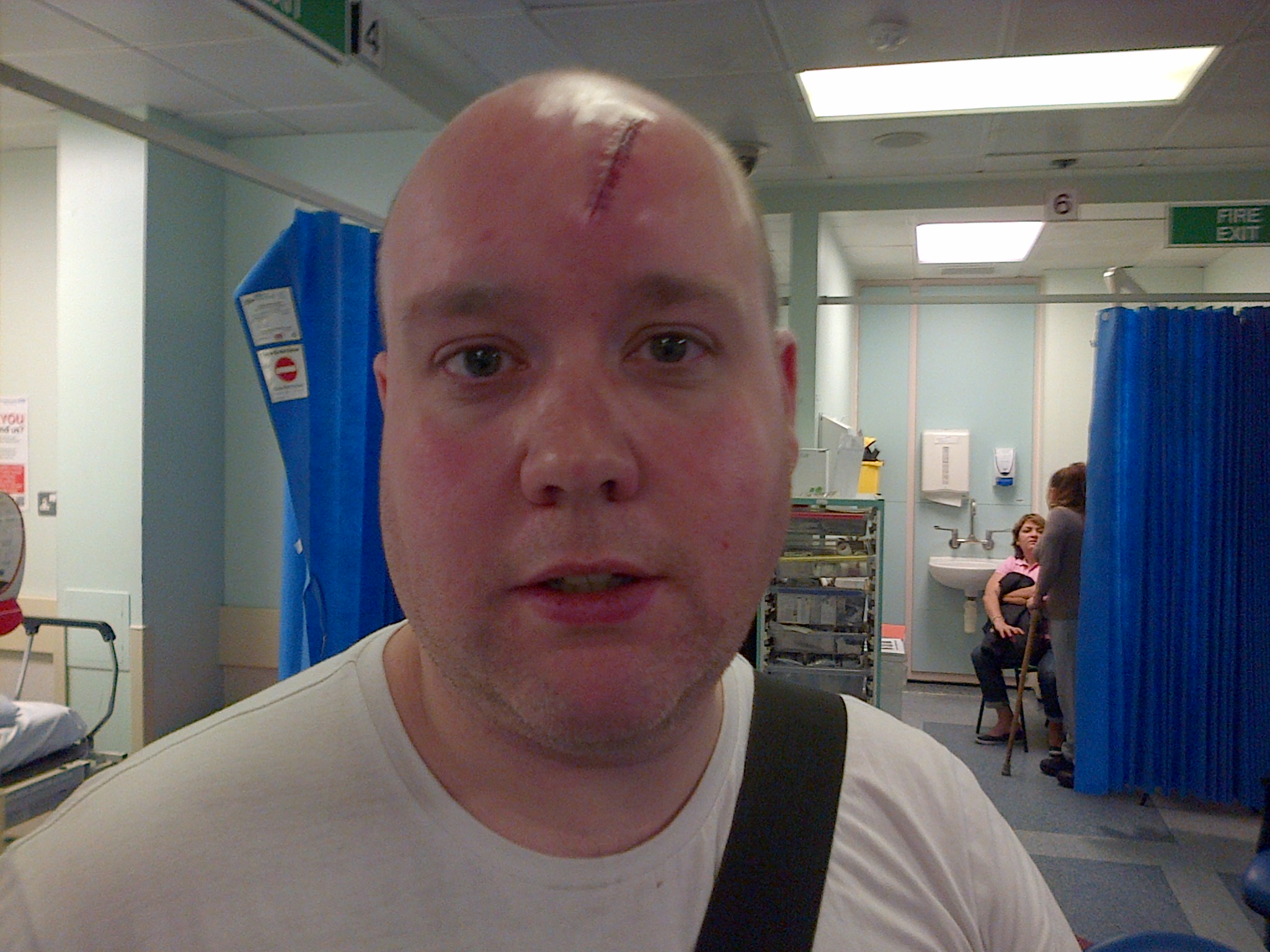 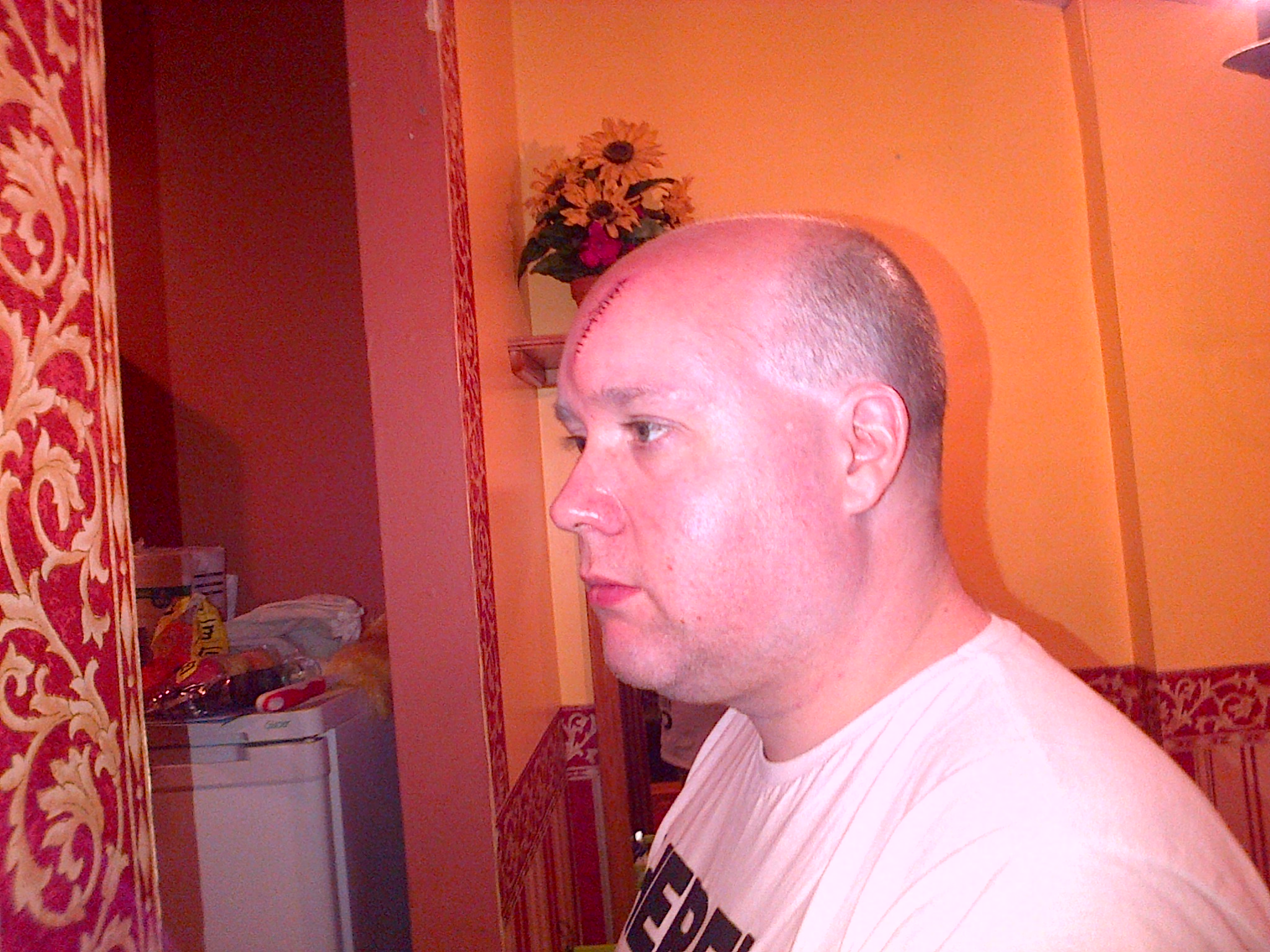 It’s now two days later and the swelling has significantly subsided. The skin at the bottom of the cut has even re-joined, so hopefully it won’t take too long to heal fully. I’m due to have the stitches removed later this week, but I will have a nice big permanent scar, which is likely to mean new headshots – and I’ll also need to let the modelling agency that I recently registered with know about it too.

Mentally I’m fine – surprisingly! It could have been a whole lot worse. I’m just incredibly grateful to Amanda and the rest of the team who came in to offer support. I’ve cancelled the one shift I had this week because I’m not allowed any make up or prosthetics, and I need to get as much air as possible to the wound while it recovers. However, it’s not put me off! Scaring is great fun – I just need to make sure I keep it within the realms of fantasy from now on!

I’m also grateful that Maddy was around, as it made the time in A&E pass a whole lot quicker. I’m thankful to James for getting me to the hospital too, and to the hospital staff who were very supportive and seemed to enjoy the irony of me being there. 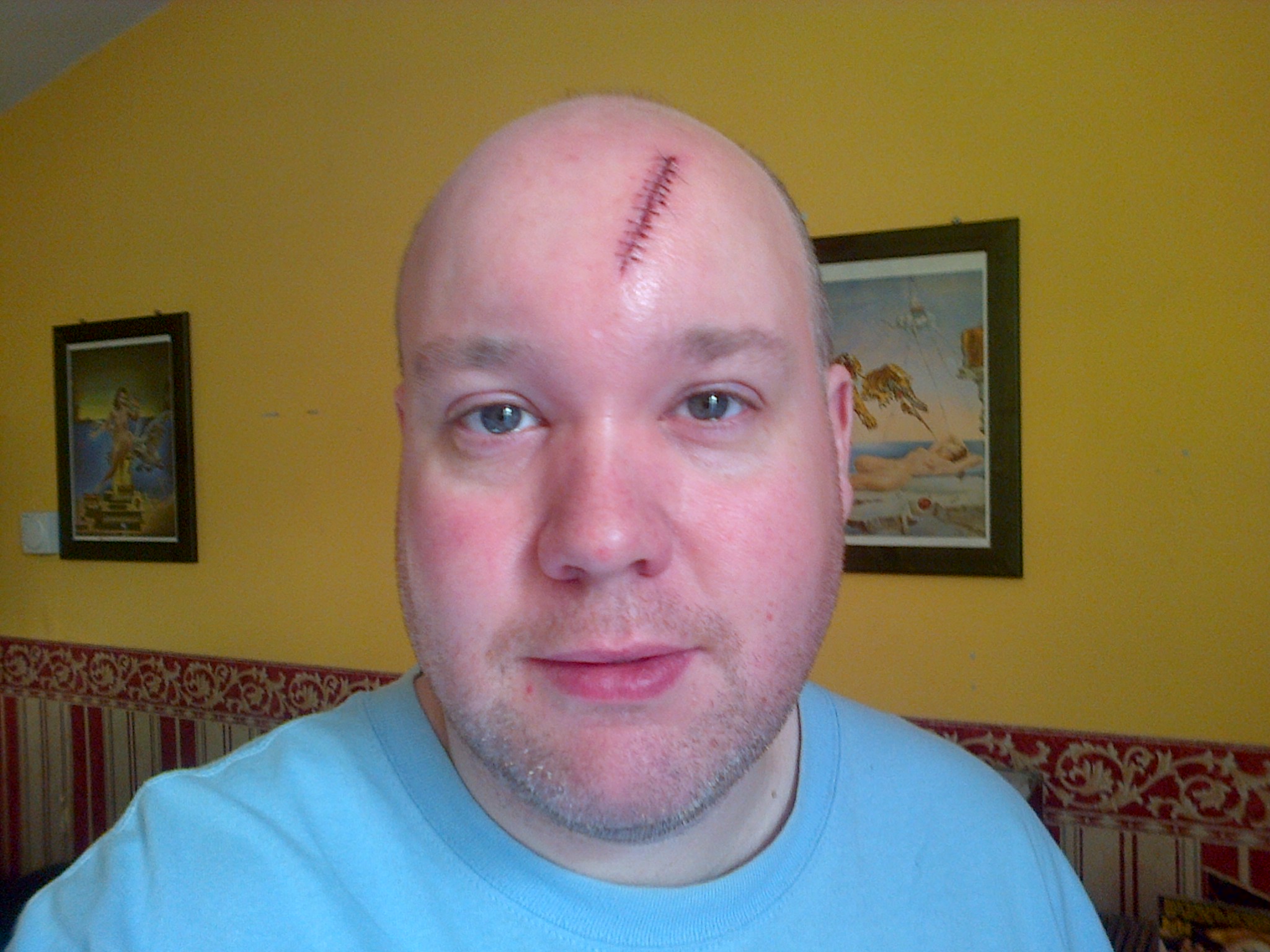 This is me today, still a little tired, hence the dopey look, but generally in good spirits. In reality it’s probably put any potential acting work on the back burner temporarily, but hey-ho, at least I’m still in one piece!